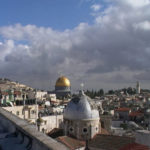 The mission of Joining Hands For Justice in Israel and Palestine (JHJIP) is to promote peace with justice in the Holy Land.  We seek to bring an end of occupation and exploitation of land and resources by applying Christ’s teaching through prayer, advocacy, and education.  Our hope is to build relationships on the basis of equality and human rights so that all may live in peace with dignity.

JHJIP works to end the Israeli occupation of Palestinian land through Education, Advocacy, and Building Relationships.

In 1999, the Presbytery of Greater Atlanta (PGA) enrolled in the Presbyterian Hunger Program’s Pilot program, Joining Hands Against Hunger.  All churches in the Presbytery were invited to an informational meeting in 2000.  Five churches signed the “Covenant of Support.”  They were Lawrenceville, Roswell, Trinity, St. Andrews, and Church of the Resurrection.  These churches together with PATH constituted the core group.  Sarah Humphrey worked as staff to the hunger program and to the partnership.

In response to the decision of the Presbyterian Church/USA, to introduce a new strategy for a holistic international hunger ministry, the pilot program was based on the need to work to alleviate systems of injustice and oppression that actually cause hunger in the first place.  Joining Hands proposed a two-pronged approach to international hunger ministry by building bridges of solidarity between PCUSA congregations and their respective Presbyteries with overseas country networks formed by churches, non-governmental organizations and grassroots groups involved in hunger efforts in their specific communities.  Initially, with a national goal of ten partnerships, PGA formed a partnership with Palestine.

The mission of the partnership is to end hunger in occupied Palestine; it was determined by the Committee that the primary cause of hunger in Palestine is the occupation.  Our activities have therefore focused on working to end the occupation through “Education, Advocacy, and Building Relationships.”  In 2005, the name of the Committee was changed to Joining Hands for Justice, to coincide with Palestinian partners, and in keeping with its goals to support ending the occupation and promoting peace with justice in Palestine and Israel.   *

In 2011, we were told that our model did not meet the requirements of the Joining Hands Against Hunger Pilot Program model, and funding for our efforts was discontinued.  We have continued as a volunteer committee, without PGA staff support or funding from the Hunger Program.  In May 2011, JHFJ was designated a Partnership by the newly organized PGA.