Voices for Justice: Jerusalem from the Lens of a Native Son — Philip Farah

Voices for Justice: Jerusalem from the Lens of a Native Son — Ghettoization and Pauperization

Philip Farah, a member of EPF PIN’s advisory council and a key member of the Palestinian Christian Alliance for Peace, traveled to Palestine in June.  He reflects on his time on the ground.

Last month, I participated in an Eyewitness Palestine delegation of 22 Americans. Over a 10-day period, our intensive tour took us to cities and villages all over Palestine/Israel. We met with over 22 groups involved in various forms of resistance to Israeli domination. Our home base was Jerusalem, the city where I was born and spent the first 27 years of my life before emigrating to the U.S. in 1978. 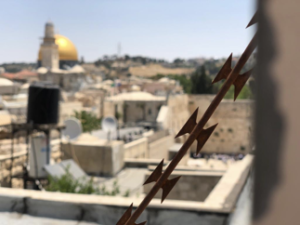 East Jerusalem had been—overall– a very pleasant city to live before the Israeli occupation of 1967. It was a small city of about 65,000 people, but with strong connections to nearby suburbs and villages. It was the main transportation hub for all the West Bank, and hence a major commercial center. Its status as the home of al-Aqsa Mosques and the Holy Sepulcher has always made it the center of life of all Palestinians— physically for its inhabitants, and spiritually or culturally for all Palestinians.  Because of its spiritual importance, it has also always been a far more cosmopolitan place than most cities of its size anywhere in the world.

This was the Jerusalem of my childhood and youth. Not a wealthy city, but generally prosperous. I received all my pre-college schooling a school that was established by English Anglicans, where most of my schoolmates were Muslim. I was born in a hospital established by Germans and received medical care in clinics established by Austrians and American. Palestinians from all over the West Bank came to my town to sell their fresh fruits and vegetables, and the magnificent Old City would be filled with shoppers and worshippers from all over the West Bank and far beyond on Fridays and Sundays.

Today, only the Gaza Strip and the so-called H2 section of the Palestinian city of Hebron surpass East Jerusalem in the sense of strangulation that the Palestinians feel under Israeli domination.

Israel’s belligerent policies have effectively fragmented the Palestinian territories in a complex scheme, shutting Gaza into the world’s largest open-air prison, and dividing the West Bank into several segments separated by blocks of colonies (settlements) and roads that only Israelis and international visitors can traverse. East Jerusalem has been ghettoized, making it extremely difficult for any Palestinians from other locations in the West Bank to enter it for any reason. No longer is it the transportation and commercial center that it used to be. It feels isolated from its historic lifeline and, while Israel does everything to make life miserable for all Palestinians under its control, Jerusalem seems to be the saddest of all urban centers in the West Bank.

Israel claims that it has united East Jerusalem and West Jerusalem into one Greater Jerusalem. Nothing can be farther from the truth. The loss of East Jerusalem’s position as the center of the West Bank’s economy has far from been compensated by stronger integration with the Israeli economy, and things are getting worse. A 2018 report from the National Insurance Institute of Israel reported poverty rates among Palestinians of East Jerusalem rising from 70 to 75 percent from 2016 to 2017.

As far back as 2003, a British House of Commons report concluded that “[i]t is hard to avoid the conclusion that there is a deliberate Israeli strategy of putting the lives of ordinary Palestinians under stress as part of a strategy of bringing the population to heel.”  Nowhere has this been more apparent than in East Jerusalem, where Israel is obsessed with stifling normal population growth of the Palestinians in order to maintain Jewish demographic dominance in Greater Jerusalem.  Israeli authorities had actually set a target for a Jerusalem population of 70 percent Jews vs. 30 percent Palestinians.  This plan has actually failed in this regards and forced the authorities to revise the ratio to 60/40, but Israel has intensified its belligerence towards the Palestinians of Jerusalem. Israel’s toolkit includes various manipulations of the law as well as blatant discrimination to rob Palestinians of their land, evict them from their homes, and place barriers to their livelihood.

It is incumbent of people of good conscience everywhere to oppose these racist policies for the city that millions of people around the world venerate. Real actions of solidarity are needed, not just declarations of goodwill. In the words of the Palestinian Christian Kairosdocument of 2009:

We call on [faith communities everywhere] to say a word of truth and to take a position of truth with regard to Israel’s occupation of Palestinian land. … [We] see boycott and disinvestment as tools of non-violence for justice, peace and security for all.