Christ at the Checkpoint 2020

Christ at the Checkpoint 2020, from Atlanta 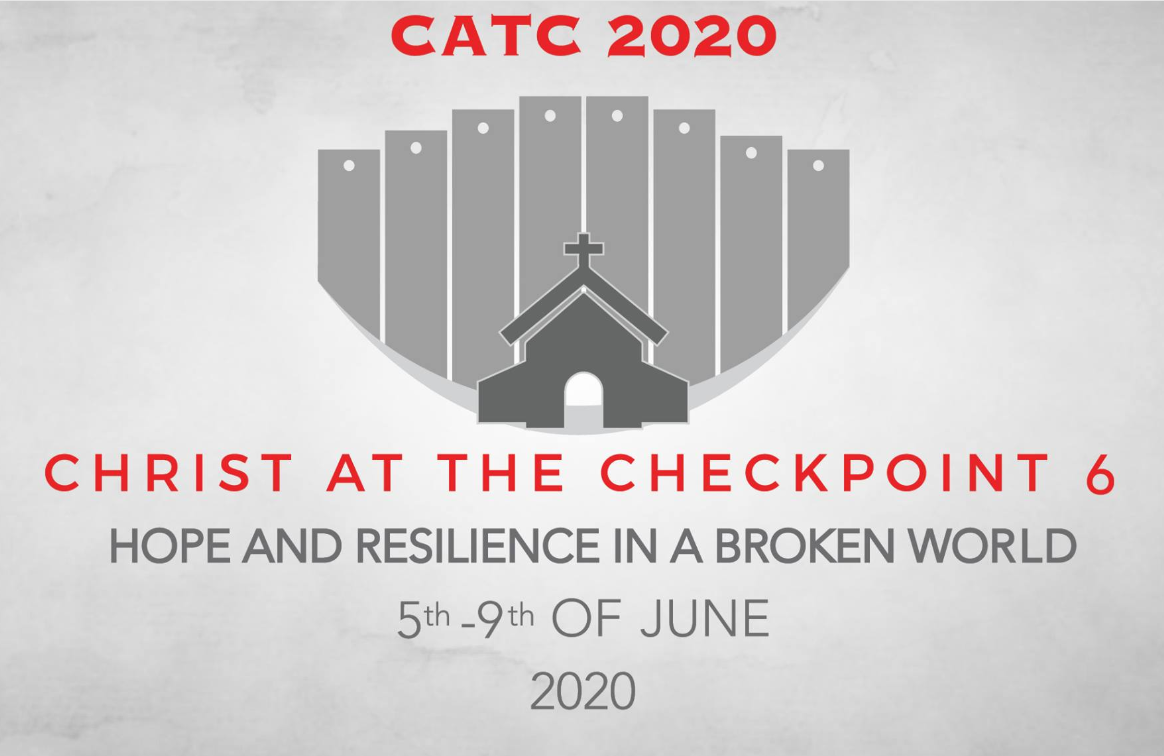 ABOUT THE CONFERENCE
Join us in the year 2020 in Bethlehem for the sixth international Christ at the Checkpoint conference. The theme will be Hope and Resilience in a Broken World. Join us as we consider what it means to follow Christ in the shadow of walls and conflict, and how to be resilient in our Christian witness, keep hope alive, seek just peace and truth, and preach good news in the midst of a broken world.

ABOUT THE TOUR
Your tour will depart Atlanta on Thursday May 28, 2020, tour the Holy Land, spending time understanding the Israeli Government and society perspective as well as the Palestinian perspective, both Christian and Muslim. On Thursday June 4, 2020 you will arrive in Bethlehem for the Christ at the Checkpoint conference as well as seeking local sites in Bethlehem. We will return to Atlanta on Wednesday, June 10, 2020.

ITINERARY – SUBJECT TO MODIFICATION
Sunday, May 31st: Arrival TLV airport – meet, assist and transfer to Netanya for Dinner and overnight in Bethlehem.

Monday, June 1st: Drive to Caesarea Maritima: The ancient city and harbor of Caesarea Maritima was built by Herod the Great at about 20 BCE. It was there that Peter the Apostle came and baptized Cornelius the Centurion and his household, and the first Christian baptism was conferred on Gentiles. When newly converted Paul the Apostle was in danger in Jerusalem, he was transferred to Caesarea where he was imprisoned for about two years. Megiddo: In ancient times Megiddo was an important city-state. Excavations have unearthed 26 layers of ruins, indicating a long period of settlement. Megiddo is strategically located at the head of a pass through the Carmel Ridge overlooking the Jezreel Valley from the west. The Book of Revelation mentions an apocalyptic military amassment at Armageddon, a name derived from the Hebrew “Har Megiddo” meaning “Mount of Megiddo”. Cana: Cana is best known as the place where, according to the Fourth Gospel, Jesus performed his first public miracle, the turning of a large quantity of water into wine at a wedding feast (John 2:1-11) when the wine provided by the bridegroom had run out. Nazareth: The Church of the Annunciation was established at the site where, according to Roman Catholic tradition, the Annunciation took place. Greek Orthodox tradition holds that this event occurred while Mary was drawing water from a local spring in Nazareth, and the Greek Orthodox Church of the Annunciation was erected at that alternate site. We will visit both sites. Dinner & overnight in the Galilee.

Tuesday, June 2nd: Boat ride on the Sea of Galilee. The Mt. of Beatitudes: The Beatitudes are the eight blessings Jesus gave during the Sermon on the Mount. We will visit the suggested location of this mount (Matthew 5). Tabgha: It is traditionally accepted as the place of the miracle of the multiplication of the loaves and fishes (Mark 6:30-46) and the fourth Resurrection appearance of Jesus (John 21:1-24) after his Crucifixion. Capernaum: The town is cited in the Gospel of Luke and the Gospel of John where it was reported to have been near the hometown of the apostles Simon Peter, Andrew, James and John, as well as the tax collector Matthew. Jesus selected this town as the center of his public ministry in the Galilee after he left the small mountainous hamlet of Nazareth (Matthew 4:12–17). He also formally cursed the city, saying “You shall be brought down to Hades,” (Matthew 11:23) because of their lack of response to his teaching. Drive back to Bethlehem. Dinner and overnight in Bethlehem.

Wednesday, June 3rd: Mt. of Olives: The Mount of Olives is one of three peaks of a mountain ridge which runs for 2.2 miles just east of the Old City across the Kidron Valley, in this area called the Valley of Jehoshaphat. Several key events in the life of Jesus as related in the Gospels took place on the Mount of Olives, and in the Book of Acts, it is described as the place from which Jesus ascended to heaven. From here, we will have a panoramic view towards the Temple Mount and the Old City of Jerusalem. The Garden of Gethsemane: Located at the foot of the Mount of Olives in Jerusalem, it is most famous as the place where after the Last Supper Jesus prayed the night before his arrest and crucifixion. Mt. Zion: Important sites on Mount Zion are: The Dormition Abbey: During his visit to Jerusalem in 1898 for the dedication of the Protestant Church of the Redeemer, Kaiser Wilhelm II bought this piece of land on Mount Zion and presented it to the “German Union of the Holy Land”. According to local tradition, it was on this spot, near the site of the Last Supper, that the Mary, Mother of Jesus, died. King David’s Tomb: According to a tradition beginning in the 12th century it is a site viewed as the burial place of David, King of Israel. The Room of the Last Supper (Cenacle): Since at least the fourth century AD, it is a structure identified as the Cenacle, the site of the Last Supper, and has been a popular Christian pilgrimage site on Mount Zion. Bethlehem: The Church of the Nativity of Jesus. The holy site, known as the Grotto, that the Church of the Nativity sits atop, is today associated with the cave in which the birth of Jesus of Nazareth occurred. In 2012, the church complex became the first Palestinian site to be listed as a World Heritage Site by the World Heritage Committee. Dinner and overnight in Bethlehem.

Thursday, June 4th: The Temple Mount: Traditions often identified it with the biblical Mount Moriah where the story of the binding of Isaac is set. The Temple Mount is the holiest site in Judaism, which regards it as the place where God’s divine presence is manifested more than any other place. The Mount has great significance in Christianity due to the role the Temple played in the life of Jesus. As a twelve-year-old boy, Jesus was found in the Temple where he confounded the Jewish theologians with his knowledge of the Torah. (Luke 2:41-50) During his ministry, Jesus challenged the corruption of those who used the Temple for commerce and extortion (Matthew 21:12-17) and prophesied the temple’s destruction, which came to pass in AD 70. The Wailing Wall: Also, known as The Western Wall. Parts of the wall are remnants of the ancient wall that surrounded the Jewish Temple’s courtyard and is arguably the most sacred site recognized by the Jewish faith outside of the Temple Mount itself. Via Dolorosa – The Church of the Holy Sepulcher. The Garden Tomb: It is a rock-cut tomb in Jerusalem which was unearthed in 1867 and has subsequently been considered by some Christians to be the site of the burial and resurrection of Jesus. Here we have the possibility of having a worship service. Dinner and overnight in Bethlehem.

COST:
You can anticipate the trip being in the range of $2500 per person, or $3500 per person with air travel. This is an inclusive cost-based tour. Except for some beverage and your spending money, everything is included in the cost: Hotel, Ground Transportation, Site/Tour Fees, Tips, Gratuities, Taxes, 3 Meals per day and more.

RSVP TODAY
Go online to RSVP and pay with our tour company, Aeolus Tours.
Continue to check this page for updates.

admin1 September 7, 2019 Christ at the Checkpoint 2020 A Jewish Perspective, Holy Land Travel, Justice for Palestine No Comments »
The Danger of Neutrality by Anna Baltzer at TEDxOcala
It looks like Israel wants Palestine’s Land, but not Its People