The only entry point between the southern West Bank and Jerusalem is still chronically overcrowded. Its makeover is intended to sanitize the occupation – to make it a tolerable reality, like a chronic disease. 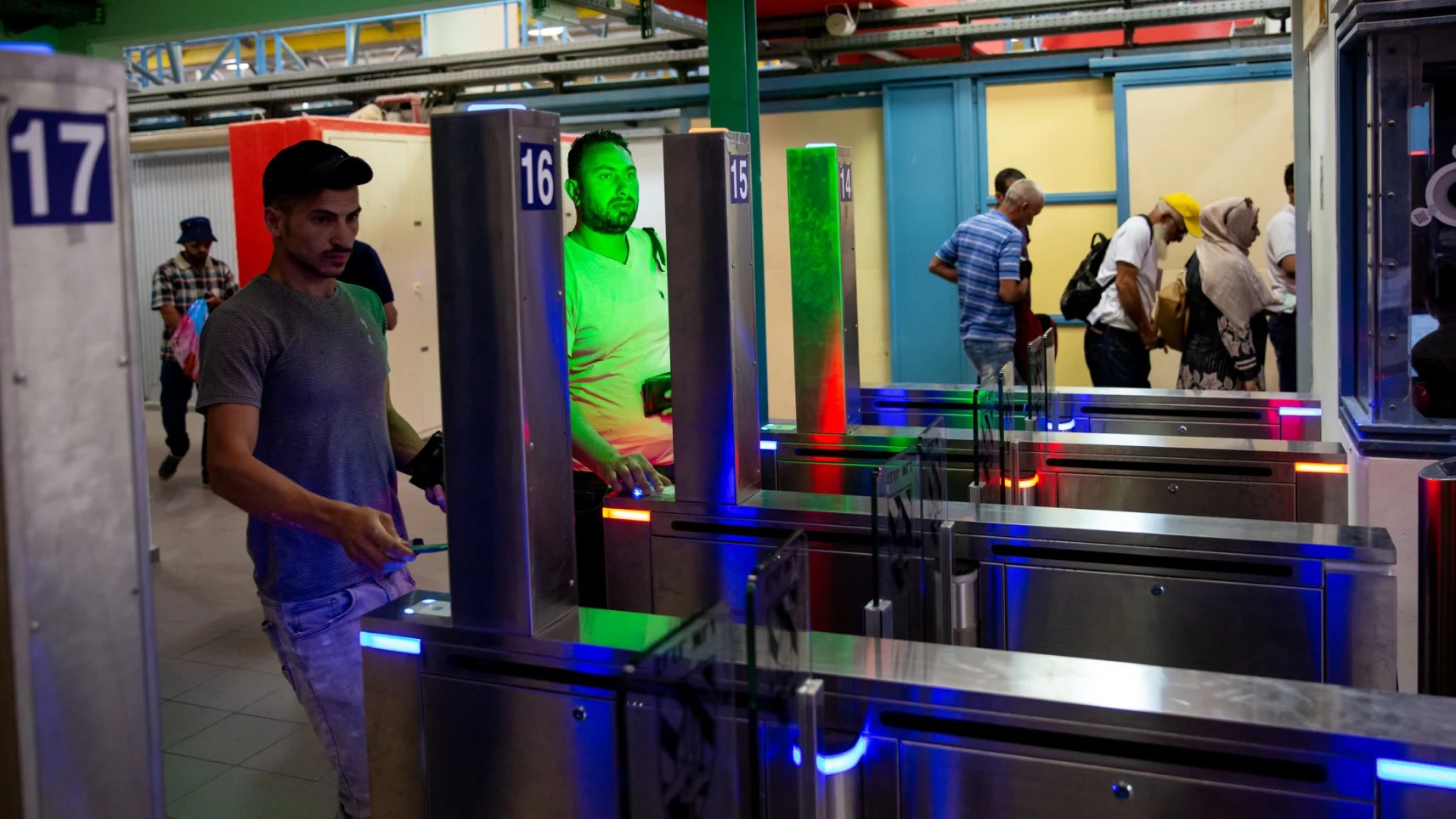 We knew the day was lost the moment we arrived at Checkpoint 300. An intertwining mass of people was spilling out of the ominous structure into the streets outside. They were packed shoulder-to-shoulder in a winding footpath walled by concrete and metal bars.

Checkpoint 300 is the main entry point connecting the southern West Bank with Jerusalem. It is framed in a type of dystopian imagery that only exists in Palestine: a concrete wall 30-feet high, guard towers with tinted glass, machine-gun muzzles peeking through tiny windows, and anti-apartheid Banksy street art.

The checkpoint, historically one of the most overcrowded, was recently renovated to install biometric readers and reduce waiting times. But on that day it was severely understaffed and passing there remains a frustrating experience littered with absurdities.

It was the second day of Eid al-Fitr, the holiday that marks the end of Ramadan. During this time, some Palestinians apply for special permits to enter “the Inside” – the Palestinian term for Israel – to either dip their toes in the Mediterranean or prostrate in Jerusalem. My father’s family was separated during the 1948 war and as a result, several uncles found themselves as Israeli citizens. One was waiting for us on the other side of the checkpoint. My parents, brother and 4-year-old nephew had a day planned to visit the beach inside.

The outer entrance of Checkpoint 300 was peculiar. The Israelis had set up two full-height metal turnstiles in order to control entry into the checkpoint – a checkpoint for the checkpoint. With only two installed, bottlenecks were unavoidable. I estimated at least 200 people were waiting outside when we arrived. This bottleneck is so common that you could easily overhear chatter contemplating the conspiratorial notion that it was all by design.

After an hour of impatient pushing and shoving, while simultaneously protecting our place in line, we found ourselves past the outer gate. That first set of turnstiles opened onto a long wide corridor. On the wall to my left, a message was spray-painted: “This crossing was built for your convenience. Let’s preserve it!”  This type of absurd messaging is part of Israel’s latest strategy to abort Palestinian statehood: The five-star occupation, the no-state solution. The goal seems to sanitize the experience and make the occupation a tolerable reality, like a chronic disease.

The corridor opened onto yet another forming an L-shaped path. This second corridor had four large double doors which opened into four connecting, parallel rooms, each filled with hundreds of Palestinians.

Each room had a cage-like turnstile with a very small opening that allowed only a single person through. On the other side of each turnstile, there was a metal detector next to a small room with tinted glass. The Israeli soldier in that room controlled the flow of each turnstile remotely. An electric panel on top of the turnstile turned green when it was open, red when it was closed. It usually turned green for a few seconds and stayed red for minutes.

The moment we joined the already-frustrated mass of people, time stood still. Unknowingly, we were now experiencing mass hypnosis. Our eyes were fixated on the red electrical panel. Every time it turned green, everyone felt a little relieved and pushed forward from all directions, suffocating the ones closest to the turnstile.

And then there are the things you overhear:

“You thought you were just going to have a nice day? Ha! They need to humiliate you first.”

“By God this is what they want.”

“Believe me, they are behind that black window laughing.”

“Animals. I swear to God we are animals.”

Two hours later, the monotony of waiting was disrupted by a chorus of shouts that came from my left. A pair of sweaty bronze forearms penetrated the horizon of foreheads. They carried an unconscious infant. Its arms dangled lifelessly on its side. Its face was frighteningly red.

All I wanted to do was go to the beach, or at least get to Jerusalem. But instead, I found myself witnessing absurd imagery which ridiculed my expat’s fluid standards of normalcy.

The father carrying the infant pushed his way through the crowd to the turnstile, which at the moment was his only way out. The light on top was still red. Some people tried to get the attention of the Israeli soldier they presumed was behind the tinted glass.

After the infant passed, a fight broke out around whose turn it was to go forward. A bearded man started chanting “God is Great” to calm the crowd. His attempt at music therapy failed.

“We need to do something. Kids will suffocate if this keeps on,” my brother said, with his son now dangling above his shoulders. He linked arms with me and the man on his other side. He then asked the men closest to the walls to link up with those around them. Each man wanted the other to commit first. As we were having this discussion, a man rushed from behind and offered to link arms with me. We formed a human wall around the turnstile to relieve the pressure on those closest to it.

Once the turnstile turned green, that same eager Samaritan stepped to the side and created a passage for his entire family to enter. I have to say, I secretly admired his opportunistic enterprise. After that incident, the human link dissolved. My brother’s selfless attempt to organize had failed. Trust, selflessness, and unity are elusive when you are fighting to survive. Now, that is a conspiratorial notion so Machiavellian, it could be believed.

After a few hours of more waiting and more pushing, we finally found ourselves at arm’s length from the turnstile. It had been nervously red for over 15 minutes. A fully-armed Israeli soldier abruptly climbed on top of the wall next to it. He pointed his automatic rifle at everyone in the room; his finger was too close to the trigger. He yelled in Hebrew and made the universal gesture of “get out.” This turnstile was now closed—with no explanation given.

We went outside to recharge before trying again in one of the other rooms. My brother and I smoked half a pack of cigarettes. I am not a smoker.

We made it through a few hours later. Our uncle picked us up. The day was lost and the plans cut short. While driving through Jerusalem, we stopped at a traffic light. A group of settler teenagers were jubilantly clapping and dancing next to a huge election banner. They jeeringly asked my uncle to honk his horn in support of their extremist right-wing candidate. My uncle, a Palestinian citizen of Israel, froze at the wheel, afraid to react.

In a perfect world, I would have left Checkpoint 300 a harsh review on Google Maps. “Half a star. Poorly designed. Inconsiderate service. No food.” But this is the occupation after all. There are no suggestion boxes in an occupation. The methods of control are designed with complete disregard to those subjugated – not unlike herding cattle.

Back in the United States, some are still surprised why I cringe when their family friend says: “Oh I have been to Jaffa. Beautiful city. We had great fish there.” I have never visited the coastal cities. My entry to the “inside” always had a purpose and a time limit – usually a few hours to obtain a visa from the U.S. consulate in Jerusalem. It is fair to say that for a Palestinian it is easier to vacation in Thailand than visit two cities that are 15 minutes apart.

The reality of the Israeli occupation of Palestine is not always dramatic. On the contrary, it is often a collection of seemingly-trivial micro-aggressions spread out through one’s day. Therefore, the very nature of the occupation makes it difficult to communicate and enables its persistence.

Ahmed Alkhateeb is a Palestinian cancer researcher from Hebron. He lives in Boston and has published in the Los Angeles Review of Books and The Atlantic.

admin1 January 2, 2020 Renovated' Checkpoints A Palestinian Perspective No Comments »
Bernie Sanders on Aid to Gaza
A Visit to Syria with Father George Makhlouf