The Palestinians’ plea for liberation, from Presbyterian Mission 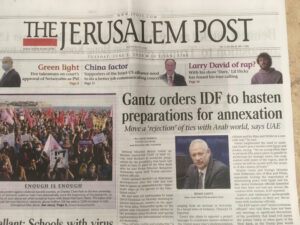 Additional West Bank annexation will have a number of harmful consequences for Palestinians and others. The United Nations has declared the plan illegal under international law.

Amid weeks of global preoccupation with the personal, social, economic, and political impact of the COVID-19 pandemic, the plight of the Palestinian people bears a growing, striking resemblance to George Floyd’s plea, “I can’t breathe.” Ever since 1967, the knee of Israel’s military occupation of the West Bank and Gaza has been increasingly and relentlessly pressing down on the Palestinians’ neck.

While the coronavirus has dominated the attention of the world, Israeli government policies, state military and police brutality, and vigilante violence by settlers and extremist elements of Israeli society have underscored the entrenched racist and systematic disdain toward native Palestinians. Such attitudes have more recently been manifested in accelerated extrajudicial killings of Palestinian individuals, home demolitions, attacks on farming communities and massive seizure of Palestinian lands.

Instant killing for mere suspicion, such as in the case of Iyad Khairy al-Hallaq, an autistic 32-year old man with the mental age of a 7-year-old, while on his way to an East Jerusalem vocational school for persons with special needs. His killing is but one recent example of undisciplined military police behavior. Iyad’s condition had impeded his mobility. When soldiers stopped and tried to search him, he was frightened, confused and did not follow orders. Immediately, he was shot and left bleeding to death. The incident recalled the killing of another innocent Palestinian, Abdel-Fattah al-Sharif, of Hebron, who was shot to death in 2016 in front of cameras. The soldier’s trial produced a sentence of a few months in jail. In recent weeks and in a similar fashion, several other incidents of instantaneous killing — rather than suspect arrest and interrogation — took place in Ramallah, Jerusalem, Nabi Saleh and Beit Jala, all reflecting systematic discrimination and intimidation sanctioned by government policies.

A 57-page report, titled “Deadly Exchange” and published by Jewish Voice for Peace, helps uncover the connection between numerous instances of U.S. police brutality and Israeli military violence: it shows how U. S. police departments systematically send police officers to be trained by the Israeli Defense Forces. There are even Israeli training camps and academies operating in both Israel and the United States. In the U. S. such camps appeal to American civilians with the call, “The Second Amendment protects your right to own a gun,” adding that Israel has the expertise and “can give you the skills to use it.” Learn more here.

And now, still taking advantage of a world distracted by the impact of COVID-19, the current Israeli “emergency government,” with the strong, explicit backing of U. S. President Donald Trump, is in a race with time to accomplish its long-envisioned annexation plan before the November election. The date of July 1 is set for the implementation of the plan, which would formally impose Israel’s sovereignty on at least 50% of “Area C,” which amounts to 30% of the entire West Bank. The targeted areas comprise the entire Jordan Valley and other swathes of Palestinian-owned land as well as significant water resources that are already under Israeli military control.

This is what the annexation will mean:

Native residents of 43 Palestinian villages located in the area will remain under the sovereignty and authority of the occupying power, and stateless, as they would not be given Israeli citizenship. They will be living in scattered pockets of land, while being surrounded by eight existing and expanding Israeli settlements/colonies. In the long run, Israel aims at emptying the area of its Palestinian inhabitants.
Investors in agricultural projects and growers of fruit and vegetable farms (vineyards, date palms, watermelons and cantaloupes, table vegetables as well as medicinal herbs) are frightened by the looming danger of having their lands and greenhouses expropriated.
Settlers, protected and supported by military tanks and bulldozers, have already laid their hands on grazing lands and fields of plants that require no irrigation, thus depriving native Palestinians of the benefits they looked to reap. The lands settlers could not take, they destroyed by fire.
The chair of the Auja village council points out that the town’s 6,000 residents who own 106,000 dunums (approximately 25,000 acres) live under the imminent threat of confiscation of the Auja spring, where the military already has torn down a water regulation facility, and the scattering of the residents.
Already, even before the announced annexation date of July 1, signs that had previously prohibited the entrance of Israelis into these Palestinian territories have been taken down, thus declaring in effect the area an Israeli possession. New colonization maps recognizing that reality on the ground are currently being drawn.

Through his “Deal of the Century,” President Trump has given Israel the green light to proceed with the annexation. The United Nations has declared the plan illegal under international law. The European Union, the Arab League and numerous sovereign countries around the world have condemned the anticipated action by Israel and warned of its probable dire consequences. The Palestinian Authority has declared that if the annexation goes through, it will not be obligated by any of the agreements that have been signed with Israel since Oslo. Jordan has hinted that it would suspend its peace agreement with Israel. Egypt may do likewise. Ordinary people worry about outbreaks of unrest, violence, and acts of terror.

Israel still has a choice: If it seriously wants to live in enduring peace with the Palestinians and its other Arab neighbors, including those with whom it has formal or informal peace and trade agreements, it must abide by international law, and heed the Palestinian cry “I can’t breathe.”

The gospel of peace which we proclaim, and the cry of the oppressed that we hear, call us to witness in word and action to a different reality that God has willed for all peoples. That reality is eloquently expressed in these words by Arundhati Roy:

“Not only is another world possible; ​she is on her way. On a quiet day I can hear her breathing.”